[Disclaimer: This post may not make any sense to anyone but me. I am researching 21st C education trends, project-based learning, social and civic responsibility, school transformation, and Common Core State Standards. All through the lens of strategic re-design of school of the future. What follows below is some of the thought-board I am developing, and I felt compelled to share at least some of what I am discovering and thinking about…]

Today, during a Skype conversation with a trusted and highly respected educational colleague, I heard a couple of interesting threads of commentary that have led me on a fascinating research exploration for much of the day.

One of the folks here says PBL is dead. I don’t agree, but there is some strong movement against it.

We call him Pele because he knows where the ball is going, and the ball is currently going to the Common Core State Standards.

You breathe rarified air, and there are tremendous hurdles to implementing PBL in an environment overrun with standardized testing and the Common Core.

While I think that significant, meaningful PBL (capital P) has been largely non-existent in the heavily industrial-age influenced school system of the 20th century, I think PBL has thrived as a human learning paradigm for millennia, and I think PBL is alive and well as a learning methodology. In fact, I think PBL dominates learning before formal schooling, and I believe that PBL dominates the workplace of almost all jobs (if not, ALL jobs). I believe that school transformation and enhancement will necessarily include and integrate PBL. Furthermore, I think the Common Core State Standards not only support PBL, but I believe they demand it! [And I continue to mean capital-P PBL!]

Exploring Edutopia’s Resources for Understanding the Common Core State Standards, I worked on a thought board, and I am capturing a few bits and pieces here…

Intriguing videos from Hunt Institute YouTube channel regarding the CCSS:

Quotes from the CCSS website that point to PBL:

Research—both short, focused projects (such as those commonly required in the workplace) and longer term in depth research —is emphasized throughout the standards but most prominently in the writing strand since a written analysis and presentation of findings is so often critical.
– Writing: http://www.corestandards.org/about-the-standards/key-points-in-english-language-arts

An important focus of the speaking and listening standards is academic discussion in one-on-one, small-group, and whole-class settings. Formal presentations are one important way such talk occurs, but so is the more informal discussion that takes place as students collaborate to answer questions, build understanding, and solve problems.
– Speaking and Listening: http://www.corestandards.org/about-the-standards/key-points-in-english-language-arts

The standards stress not only procedural skill but also conceptual understanding, to make sure students are learning and absorbing the critical information they need to succeed at higher levels – rather than the current practices by which many students learn enough to get by on the next test, but forget it shortly thereafter, only to review again the following year.
– Math: http://www.corestandards.org/about-the-standards/key-points-in-mathematics

At the intersection and confluence of 21st century education and project-based learning, we would have:

Videos that have profoundly shaped my viewpoint on 21st Century Education and the Future of Schools…Schools of the Future:

It’s all connected! And there’s so much more! It’s about learning.

While attending the 2012 National Association of Independent Schools Annual Conference: Innovation (Twitter hashtag #naisac12), I believe I have clarified my own thinking about EduInnovation. To an even greater amplitude than I previously felt, I think we should be pushing harder and farther and faster down the spectrum of transformational innovation in schools and of schools.

In the keynote this morning, Bill Gates advocated for four primary means to leverage technology to transform schools:

While I certainly agree with these tactics for improving school, I don’t think Gates pushed hard enough for the kind of deep innovation that would truly transform schools for our learners. To me, the issue rests in the fact that Gates seemed to imply that adults would continue to be the producers and students would continue to be the consumers of school. Yet Gates said himself that school eventually got in his way as a learner and as a doer and as an innovator. When Bernie Noe, Head of Lakeside School, introduced Gates, Noe told a story of asking Gates and Paul Allen what Lakeside did to help them be so innovative at such an early age. Gates and Allen both answered something to the effect that, for awhile, school got out of their way and let them pursue their passions and interests. My interpretation: school, for awhile, permitted Gates and Allen to “study” that which interested them and fulfilled them most – building computer systems. By permitting Gates and Allen to be producers, not mere consumers, Gates and Allen created some amazing innovations at school age. Of course, Gates later dropped out of undergraduate school…because it was getting in the way of his learning and producing. 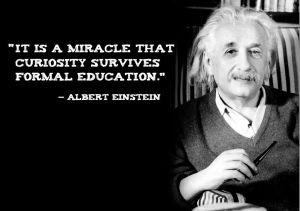 Later in the day, I was treated to two new views of school. In one after-lunch session, I listened to a team from Hathaway Brown (OH) describe their Centers for Learning and the Institute for 21st Century Education.

In addition to studying the core, in what I interpreted to be the more “traditional” component to HB, the girls choose to engage in the Centers for Learning. They can spend one day in a center, or they can spend four years in a center…or they can enjoy any amount of time in between. The girls are not graded, and they pursue deep learning and engagement in these areas of knowledge and understanding. In all cases, the girls are engaging in “real-world” issues and matters through these centers for learning. Like Kiran Bir Sethi indicates in her TED talk that I reference ad infinitum, learning in this age should blur the boundaries between school and life. By doing so, young learners are much more likely to catch and spread the positive contagion known as the “I CAN” bug. [see this HB video about student space scientists]

According to one of the shared quotes of an HB graduate, she is sincerely grateful for what her experience provided her… 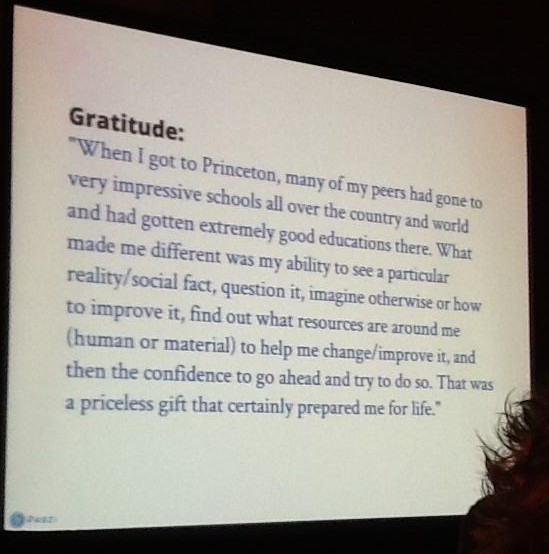 Just after the Hathaway Brown session, I learned with CEO (Chief Excitement Officer) Saeed Arida from NuVu studio and Head of Beaver Country Day School (MA) Peter Hutton. While I was blown away by the concept and design of the partnership between these learning entities, I was also reminded of my friend Gever Tulley’s Brightworks School in San Francisco. NuVu is putting student learners in the driver’s seat as producers of knowledge, design, and understanding. The adults are serving as guides on a fun course of scenic exploration and iterative prototyping.

In similar fashion to Hathaway Brown, Beaver Country Day School has a traditional component to its schooling, but it also offers a school within a school via its NuVu partnership. During a trimester, students can spend time in two-week iterative cycles of creative design and product development. How I wish I could be a student at Beaver Country Day and/or Hathaway Brown.

Despite being a presenter on Wednesday (with Jamie Baker, Grant Lichtman, and Lee Burns) on the topic of moving from “why innovate” to “how to innovate” (see our resources at http://bit.ly/WhytoHowNAIS12), I remain deeply curious about the notion of whether an existing school can completely and wholly innovate. Does an existing school practically have to create a school within a school to seed innovation and grow a tree of fresh design within its existing forest of trees? Could this explain why so many new start ups seem to be emerging on the school landscape? Are those innovators at existing schools essentially creating micro start ups within their current cultures?

What interesting times these are for schools and educators and parents and students. How thankful I am for Hathaway Brown, NuVu, Beaver Country Day, Brightworks, Presbyterian Day School, and the many others who are pushing harder and farther and faster down the transformational and innovative spectrum of school change.

[Note: I look forward to continuing to develop these unfinished and emerging thoughts and ideas with my colleagues and peers at #NAISAC12.]