Some of you know that I am a stack reader. Well, some beautiful serendipity happens occasionally in my routine of stack reading. Recently, such serendipity occurred while I was exploring “illusions” and “it’s all invented.”

For my birthday, my close friend Mary Cobb gave me a copy of Richard Bach’s Illusions: The Adventures of a Reluctant Messiah. I’ve made my first, quick pass of the book, and I took a short page of hand-written notes. I put the book and the notes in a stack with Rosamund Stone Zander and Ben Zander’s The Art of Possibility: Transforming Professional and Personal Life, which another close friend – my teaching and learning partner – Jill Gough gave me in January 2011, and which I was re-reading for purposes at work.

In Illusions, Bach wrote about a return of the Messiah as a airplane pilot who spends time with another airplane pilot who provides rides to midwesterners for about $3 per 10 minutes. In the section of the book I am currently re-reading as part of the meta-stack on which I am concentrating now, the Messiah is explaining to Richard that life is a series of illusions. Skeptical of such a philosophy, Richard bucks the thinking, and the Messiah takes Richard to a movie – Butch Cassidy and the Sundance Kid.

“It’s a good movie, Do. Sh.” Butch and Sundance, blood all over them, were talking about why they ought to go to Australia.

I was irked. “Donald, there’s just a few minutes more and then we can talk all you want. But let me watch the movie, OK?”

He whispered intensely, dramatically. “Richard, why are you here?”

“Look, I’m here because you asked me to come in here!” I turned back and tried to watch the end.

“You didn’t have to come, you could have said no thank you.”

“I LIKE THE MOVIE…” A man in front turned to look at me for a second. “I like the movie, Don; is there anything wrong with that?”

“Nothing at all,” he said, and he didn’t say another word till it was over and we were walking again past the used-tractor lot and out into the dark toward the field and the airplanes. It would be raining, before long.

I thought about his odd behavior in the theatre. “You do everything for a reason, Don?”

“Why the movie? Why did you all of a sudden want to see Sundance?”

“You asked a question.”

“That is my answer. We went to the movie because you asked a question. The movie was the answer to your question.”

He was laughing at me, I knew it.

“What was my question?”

There was a long pained silence. “Your question, Richard, was that even in your brilliant times you have never been able to figure out why we are here.”

I remembered. “And the movie was my answer.”

“You don’t understand,” he said.

“That was a good movie,” he said, “but the world’s best movie is still an illusion, is it not? The pictures aren’t even moving; they only appear to move. Changing light that seems to move across a flat screen set up in the dark?”

“Well yes.” I was beginning to understand.

“The other people, any people anywhere who go to any movie show, why are they there, when it is only illusions?”

And the exchange goes on, even more brilliantly.

Now, in The Art of Possibility…

Indeed, all of life comes to us in narrative form; it’s a story we tell.

Experiments in neuroscience have demonstrated that we reach an understanding of the world in roughly this sequence: first, our senses bring us selective information about what is out there; second, our brain constructs its own simulation of the sensations; and only then, third, do we have our first conscious experience of our milieu. The world comes into our consciousness in the form of a map already drawn, a story already told, a hypothesis, a construction of our own making.

It’s all invented anyway, so we might as well invent a story or a framework of meaning that enhances our quality of life and the life of those around us.

And, then, as illustration, the Zanders utilized the famous nine-dot puzzle.

As you may or may not know, the puzzle asks us to join all nine dots with four straight lines, without taking pen from paper. 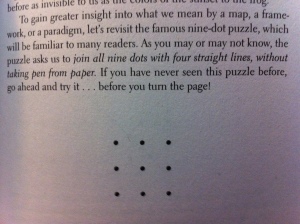 The solution involves untethering our minds from some inferred systems constraints and drawing outside the boundaries.

And the Zanders concluded the chapter this way…

The frames our minds create define – and confine – what we perceive to be possible. Every problem, every dilemma, every dead end we find ourselves facing in life, only appears unsolvable inside a particular frame or point of view. Enlarge the box, or create another frame around the data, and problems vanish, while new opportunities appear…. you can shift the framework to one whose underlying assumptions allow for the conditions you desire.

So, if you’ve read this far…God bless you. And what’s my point?

When I talk of school and education to many people, I think they unknowingly enter the nine-dot puzzle or ask “Why are we here?” But to me, school and education – the 3.0 versions – can be solved by thinking beyond the unintended boundaries of the dots…by creating a new movie of fun and learning. School 3.0 could involve a family of sorts including business, social innovation, and education. The lines that solve that puzzle may be discovered by re-imagining the boundaries…by creating a new script for the next story.

A few more quotes from Illusions, to close…

The bond that links your true family is not one of blood, but of respect and joy in each other’s life. Rarely do members of one family grow up under the same roof.

Argue for your limitations, and sure enough, they’re yours.

A cloud does not know why it moves in just such a direction and at such a speed. It feels an impulsion…this is the place to go now. But the sky knows the reasons and the patterns behind all clouds, and you will know, too, when you lift yourself high enough to see beyond horizons.