Today, I felt uncomfortable – not the kind of uncomfortable that makes you squirm but, rather, the kind of uncomfortable that makes your senses more alert and stretches you so you can really learn. Since I graduated from undergraduate school nearly 20 years ago, I have worked as a teacher. I am comfortable in schools. Today, I officially began my sabbatical by working at Unboundary. While most, if not all, of my school colleagues were enjoying the first weekday of spring break, I was choosing to venture into a different office than the one to which I am accustomed. My desired rest involved learning in new ways.

After dropping my oldest son at school (a real luxury and pleasure), I found a coffee house on 5th street so that I could peruse some reading and calm my anxious excitement. When I arrived at Unboundary early, I sat in my truck nervous about what the day would bring. A bit before nine, I tried to go inside, but the gates and doors were locked, so I returned to the safeness of the truck. Soon a familiar face gained entry, so I tried again. A brief orientation made me feel very welcome, and I was pleasantly surprised to discover that I would have a place of my own in which to nest. Still, I felt aimless. What was I supposed to be doing? When was the bell going to ring and signal that action was just around the corner? Doesn’t every office have bells? How else do they know when to switch activities? Doesn’t anything worth doing fit perfectly into 55 minutes?

Thank goodness for the airhorn that called us to the Monday morning staff meeting. Now here was a ritual I could relate to. In the Junior High, we have Monday Morning Meeting in the multipurpose room (now renamed the Oglesby Room). All 80 faculty and staff and the 559 students assemble to say the Pledge, hear announcements, take attendance, and celebrate a few community successes. At Unboundary, we assembled for the “UnWeekly” – the pre-briefing for the week which detailed the people, the projects, and the tasks that would require the collective efforts and attentions of the team. While it may sound silly, I had to keep my jaw from dropping – the slide deck for the UnWeekly was gorgeous. Design and elegance permeated even the staff meeting slide show. Yet there was no stiffness. In the first minutes of interaction, I sensed that this is a team that knows the essence of their work and clothes itself in the familiarity of doing even the routine with style and significance. 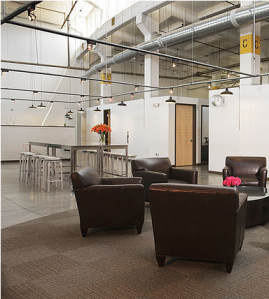 Image from Flickr - Tod Martin (All Rights Reserved by Unboundary)

Really, I was the highlight of the UnWeekly. Well, just for JJ, one of the dogs who comfortably roams the office. He loves me. But JJ was simply foreshadowing for how the bipeds of Unboundary would set out to include me in conversations, impromptu meetings, and pre-established work sessions. When educational leaders outside Westminster come to meet with me at school, I am thrilled for the interactions and exchanges, but I twitch a tiny bit because I know my work pace and rhythm will be slowed. What am I in such a hurry about? Is it the bells that have conditioned me? I did not want to be “in the way” at Unboundary and unecessarily slow the familiar beat of their work. Throughout the day, however, all made me feel a valuable listener and contributor.

At 11:00 a.m., I was pulled into a meeting of five, including a member who participated by video-call from Dallas. The purpose of the meeting was to plan further the approach the team would utilize for an upcoming client presentation. We met at “the morgue.” The morgue is a set of polished metal tables on rollers at which various collaborations occur. All at once, I was living in a microcosm of “21st century learning environments” that most schools are wrestling to understand. I think the space is named due to the metal tables, but the name is perfectly suited because I think “individuals die here.” None of the team members seemed to think for a time with a math mind, then an English mind, then an art mind. No, each used the normal brain function of integrated thinking. And they thought as a team. Not one of them seemed to wait for the moment to throw in his or her great idea that he or she had been impatiently waiting to contribute. Rather, the thinking was weaved together as the team members worked for a mutual goal. Of course, they each brought their unique skills to the table, but the threads braided together instead of remaining discernably individual.

Not long after, as I waited at the egg (another collaboration magnet) for the next meeting to plan for a “Brain Food” (a topic that deserves its own post), I traded stories with the Executive Director for Creative Intelligence. I need more reflection and conversation to do justice to our exchange, but I discovered comfort in the possibility that our jobs could be strikingly similar (if I do mine well). We both work vigorously to digest valuable information about our industries and to point others to the potential and possibilites that such information holds. And at the same time, we are pointed in various, invaluable directions by our teammates. 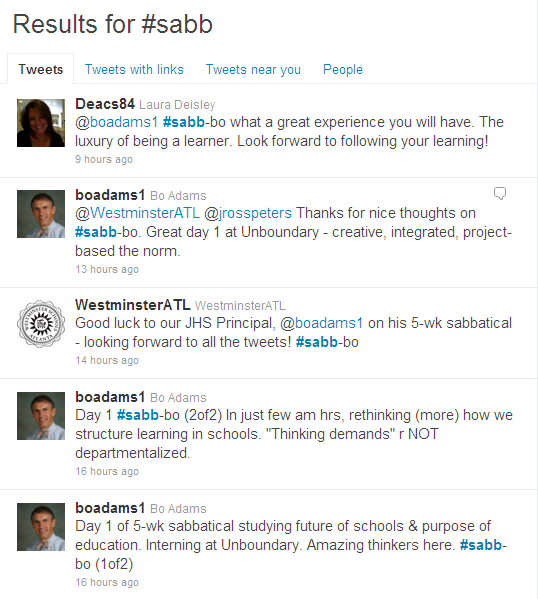 Throughout the day, I experienced moments of thoughtful preparation for TEDxAtlanta. I found joy in setting up folding chairs in the TEDx Dome – those chairs bring form to the space…form that hints at the brainspa which is about to happen on March 15. Having visted colleseums in Italy and France, I heard the sounds of long gone history in those forums. In the TEDx Dome, I could practically feel the impulses of future axons and dendrites firing and wiring.

At the close of day one, I worked with a team of two who labored ably over word choice and sentence fluency as they sculpted a small set of sentences to contain a wealth of purpose and meaning. For some time, they had reduced a 1500 word essay into its essence as four sentences, and the duo was traversing a bridge into thinking about the words and phrases visually as images that could translate to a powerful web presense.

As I sit here typing, I feel I have done no real justice to my day. I have missed details and important interactions disguised as quick pop-ins to my work space. I have inadequately tried to describe emotion and cognition. I have stitched patches, when really the work I witnessed today was a tapestry. Yet, all the words above point to a critical reality for me – one I will try to show better in future opportunities.

I know a single day in one organization does not a trend or pattern make, but I believe that Unboundary taught me an invaluable lesson in significance today. After seven years of fairly intense study about the need for “schools of the future,” I think living at Unboundary for a few hours brought the study to life. My text book lessons were transformed by experience today. I was able to see and participate in an environment for which we should be preparing our students. “For college and for life” can be found somewhere in the missions of most schools. I hypothesize that the 21st century education movement is not happening nearly fast enough.  Unboundary was pouring over with integrated thinking, creativity, teamwork, project-based learning, and relevance. Not once did they mention a client’s bottom line or profit. Countless times they mentioned a company’s significance – even their own. They are working to make a difference. They are working to guide clients to their significant purpose in the world – so that they can address the challenges of our world and make a difference.

And schools need to prepare young people for such work.