During my life, I have participated pretty heavily in sports. Play is fun and a great way to learn. I have dabbled in all kinds of sports. As I grew up, I played a lot of soccer. Not surprisingly, preparing to play soccer involved a great deal of playing the actual game. Sure, we drilled, but the drills were just micro-parts of the whole game. In late high school, I migrated to triathlon. While I certainly lifted weights and participated in stretching and plyometrics, most of my training involved actually doing long hours of swimming, biking, and running. Practicing was direct application and immersion in the sports. On “brick” days, I actually combined two, and sometimes all three, of the sub-sports with transitions so that practice immitated an actual triathlon. Practice was a virtual mimic of the game/event for which I was preparing. Is school, in its traditional format, a virtual mimic of the game/event for which we are preparing students?

My school’s mission states that we are preparing students for college and for life. I have a pretty good idea of what college is like. I have been to several as an undergrad, a post-grad, and a graduate student. My experiences at those colleges was fairly similar to my experiences as a student in K-12 school. The formats, structures, and cultures were similar. By “life” I think we mean “work” to a considerable degree. For many of one’s waking hours of life are spent working. During the past 20 years, I have spent my career working in schools, but I have never really worked in the “business” world. As an undergrad, I trained as an economist and as a marketing-management scientist. But that’s not the same as really living the business-world life that most of our students will enter after college. How do we know that we are preparing students for the “life” part of our mission? Are you reading as much as I am that business leaders indicate that students are not so well-prepared for the work-life realities? Could it be that the the practice is not a close enough mimic of the game? Is this why UVa Med School is striving to make practice more like the actual game?

In the past three days at Unboundary, I believe I have been given a rare gift as an educator. I have immersed myself in the “business world.” I will continue to do so for several weeks. While one, short sortee into the business world makes me no expert, I do have a new perspective than many career educators don’t really get to experience. I feel like I have been able to discern another data point on the life-education graph, and doing so allows me potentially to draw a line of better fit from school to college to life. 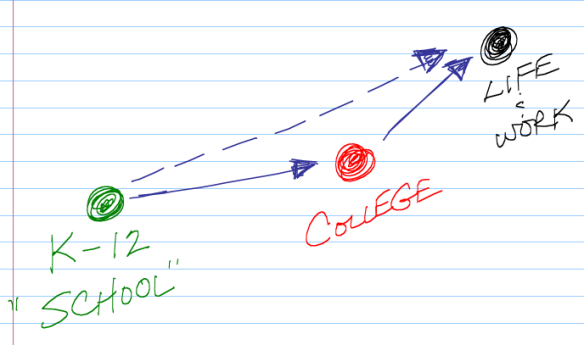 Moreover, in the past three days, I have seen in my mind’s eye the replaying of several influencial videos that I have written about and shared in previous blog posts. Sir Ken Robinson’s RSA video has come to mind countless times. The Buck Institute videos about project-based learning, and the ongoing conversation that Jonathan Martin and I are having, come to mind. Steve Johnson’s “Where Good Ideas Come From” – both the TED talk and the RSA video – come to mind. Kiran Bir Sethi’s Riverside School comes to mind. Edutopia’s videos on High Tech High and other immersive learning environments come to mind.

Maybe more than anything, I feel empowered to continue refining and revising the Synergy 8 course. For those who are new to this blog, Synergy 8 is a new course that Jill Gough and I co-facilitate for 8th graders at Westminster. This fall, Synergy 8 experienced it’s pilot semester. In short, the course is… 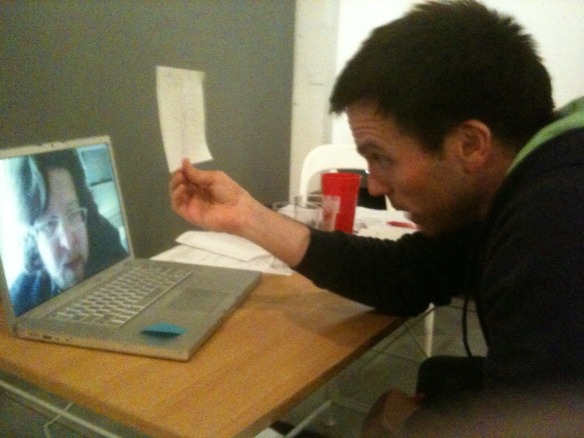